Can home-based virtual-reality training improves functional recovery in chronic stroke and induces cortical reorganization? Disability is a dramatic consequence of stroke, affecting 50% of survivors, while 30% lose their autonomy and depend on others for daily activities [1]. Rehabilitation is one of the most critical interventions in stroke, and there is evidence that it has benefits in all stroke stages. In the acute stage (first 3 weeks after stroke), rehabilitation is initiated in the stroke unit and continued during hospitalization. In the subacute stage (between 3 weeks and 6 months after the event), stroke severity and predicted outcome would guide the level of care: inpatient rehabilitation facilities or skilled nursing facilities. Despite intensive interventions, 25 to 75% of stroke patients are discharged with significant physical and functional limitations [2].

For more information on stroke, check out:

To get more insightful perspectives on neurology, watch:

In chronic stroke stages (after 6 months), rehabilitation training is still beneficial and should be provided in community-based facilities or at home with supervision. There is evidence that physical training is effective in chronic stroke, increasing quality of life and leading to cardiovascular benefits, and should be promoted by community programs. A physically active lifestyle should be encouraged by community and domiciliary interventions. Without constant participation in training programs, a decline in motor and functional acquisition is noticed in stroke patients, and gains obtained by previous inpatient interventions could be lost [2–3].

The major challenge for rehabilitation in stroke patients after discharge at home is the successful transition to the community, including an ongoing rehabilitation program. The barriers could be the limited availability of therapists and the distance to the rehabilitation center in the community. This may delay the training schedules and increase patient and caregiver dissatisfaction. One of the latest approaches in stroke rehabilitation is technology-assisted rehabilitation (TAR). TAR has the advantage of providing remote training for patients, adapted to each patient’s needs. Stroke patients could be able to frequently train with minimal therapist supervision and would be provided with constant feedback. TAR includes robotic training systems, virtual reality, and sensor-based training systems.

A study by Ballester et al. aimed to assess the efficacy and limitations of home VR-based training in stroke patients compared to domiciliary occupational therapy. The authors focused on functional recovery of upper limb motility and cortical network reorganization after treatment [2].

The study, set in Barcelona in 2017, included 39 patients after a first stroke, at more than 12 months from stroke onset (in the late-chronic phase), with mild-to-moderate upper limb (UL) motor deficits (score >2 in proximal UL on the Medical Research Council MRC scale) and without significant cognitive impairment. The patients were familiar with the RGS device previously used during inpatient rehabilitation. Twenty patients were included in the RGS group, and 19 patients were in the control group. The control group received at-home occupational therapy, while the subjects were in the RGS group.

The Rehabilitation Gaming System (RGS) uses an image capture device and allows the patient to control on the screen a virtual body part (like a hand and arm avatar) while performing different tasks. The system is shown in Figure 1. 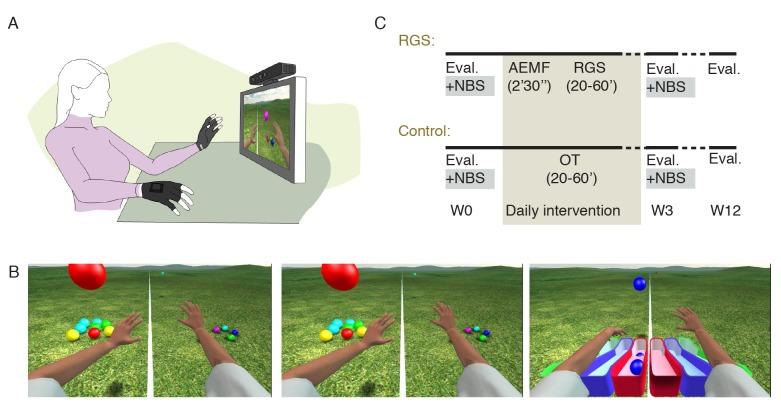 Figure 1.  The Rehabilitation Gaming System. A: PC with a vision-based motion tracking device. The patient is wearing data gloves. The system captures the movements of the patient’s joint and transforms them into an avatar shown on the screen, miming the user’s actions. B: The avatar movements from the patient’s perspective are displayed on the screen. The task is to catch the colored objects moving with different trajectories and speeds. C: Protocol of evaluation at inclusion (W0), at 3 weeks (W3), and at 12 weeks (W12). RGS = Rehabilitation Gaming System; OT = Occupational Therapy; AEMF = Automated Evaluation of Motor Function; NBS = Navigated Brain Stimulation. (From Ballester et al. [2])

The tasks and the movements trained by the system are shown in Table 1. 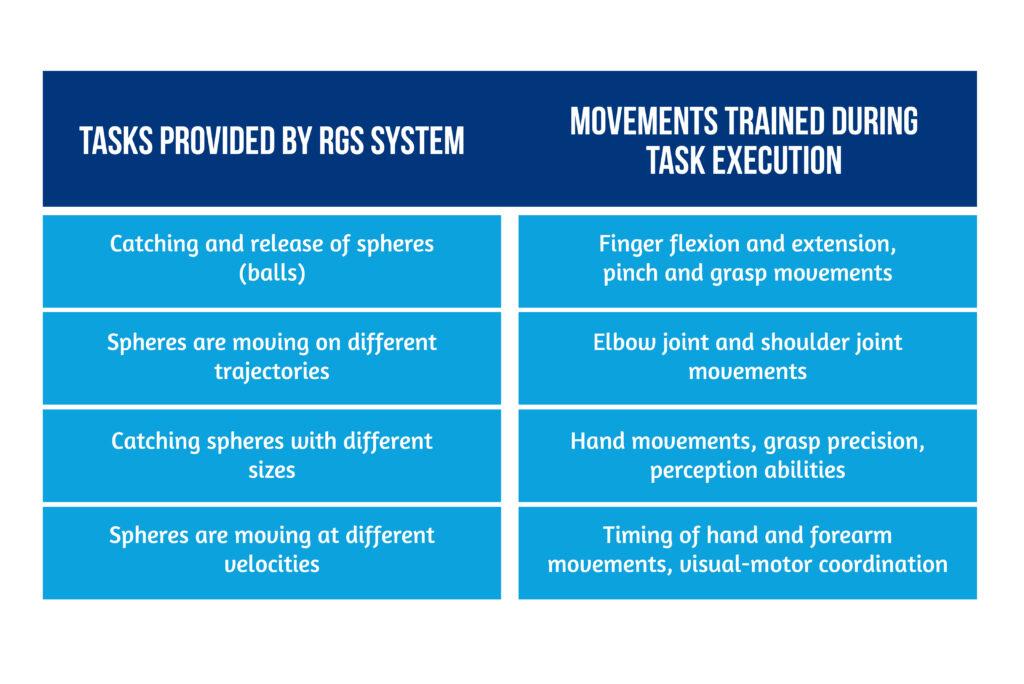 The game parameters are modulated after each task completion and adapted to maintain a performance ratio between 60% and 80% to motivate the patient and provide an optimal challenge for each training session. The RGS system also includes software for the automated evaluation of a patient’s motor performance during training, called AEMF (Automated Evaluation of Motor Function), designed to assess UL motor function without therapist intervention [2]. The AEMF scenario is split into two tasks to evaluate proximal and distal motor function. In the first task, participants had to use planar wiping motions with their arms to remove small cubes from a virtual surface. In task 2, participants were told to flex and stretch their fingers to squeeze a virtual object. These AEMF activities were performed first with the non-paretic limb and subsequently with the paretic limb to ensure that the AEMF tasks were correctly understood. Participants did not receive any direct feedback about their performance. During task execution, the software collected data on hand position and joint rotation (fingers, elbows, and shoulders) to determine the horizontal planar area covered, finger flexion, and finger extension [2].

The study intervention provided subjects with daily sessions of home training with the RGS system, 20-60 minutes/session, 5 days/week, for 3 weeks. Each session consisted of subtasks on the upper limbs’ – hitting, grasping, and placing movements. The control group was performing individual OT at home for the same duration. The expectation was that all participants perform between 1-3 training sessions a day.

At the end of the intervention, all participants could use the gloves and set the VR training system without assistance. Moreover, the authors highlight the significant increase in task difficulty during training, reflecting better performance in both paretic and non-paretic limbs [2].

In the study conducted by Ballester et al., the authors measured the motor function of the affected upper limb using standard clinical scales [2] presented in Figure 2 below: 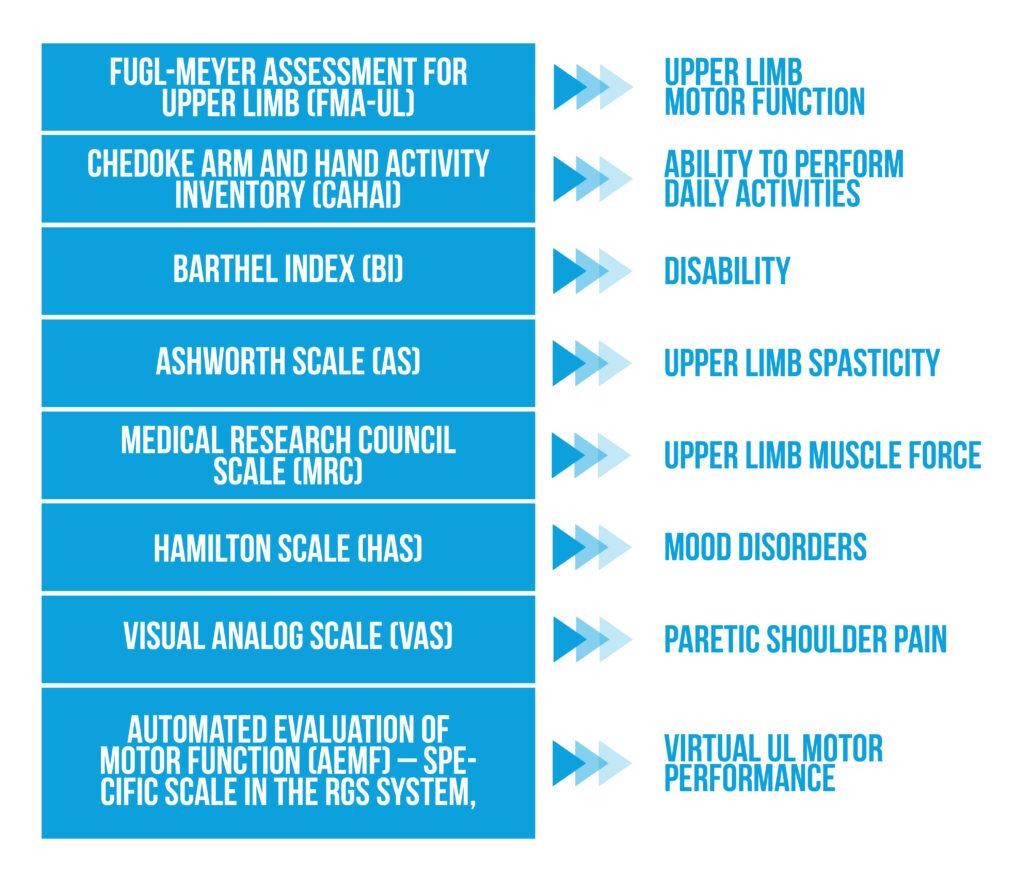 The measurements were performed at inclusion, after 3 weeks of intervention, and at 3-month follow-up. The originality of this study was developing a biomechanical model of the paretic upper limb using captured movements by data gloves and by the screen motion capture device.

No proximal and distal paretic UL motor function improvements were noticed on FMA-UL and MRC scales. Distal upper limb spasticity improved significantly 3 months after VR training (measured on AS). At the end of the intervention, the RGS group showed significantly better upper limb ability in performing daily activities (measured by the CAHAI scale), an effect that was not persistent at follow-up.

The authors pinpoint as an essential finding the detection of functional improvements in the distal part of the paretic upper limb after completing 2 or 3 weeks of VR home training. Repetitive tasks involving reaching and grasping hand movements increase the range of finger flexion and extension. This motor gain in the distal UL function was demonstrated using data collected by the AMEF system, which is another strong point in this study [2].

Looking at these results holistically,  the authors noted as a limit to their research,  that task difficulty descriptors, AEMF measurements, and NBS all converged, indicating that distal functional improvements were introduced through RGS-based training and were significantly greater for participants in the RGS group when compared to the control group. Furthermore, they also noted that the observed inter-group variabilities were due to the two different interventions applied [2].

The authors aimed to demonstrate that VR training could induce cortical reorganization in stroke patients. Navigated Brain Stimulation (NBS) procedures were used to demonstrate corticospinal tract integrity and to evaluate the motor map in the primary cortical motor area. The authors used the evaluation of the cortical representation of two hand muscles usually affected by stroke: abductor policis brevis (APB) and extensor-carpi radialis (ECR). The NBS procedure is shown in Figure 3.

Figure 3. Navigated Brain Stimulation (NBS) procedure for brain mapping (from Ballester et al. [2])
The procedure implied a  3-Tesla MRI examination of the patient. A 3-dimensional model is provided for the skull and brain parenchyma. Recording of motor-evoked potentials (MEPs) was performed using transcranial magnetic stimulation (TMS) connected to an electromyographic (EMG) system. The motor threshold at rest (RMT) for both APB and ECR muscles was estimated, and the cortical maps were drawn in both cerebral hemispheres. Corticospinal connectivity was assessed by estimation of the center of origin of the motor fibers in the cortical area. The stimulation efficacy (SE) of each map region was estimated. Both normal and affected hemispheres were evaluated.

The results showed enhanced excitability in the corticospinal tracts of the affected hemisphere after completing VR training. SE increases in the pathological cortical motor areas after the intervention. Moreover, changes in cortical connectivity were demonstrated by the displacement of the center of the cortical motor area, producing MEPs for both ABP and ECR muscles after the intervention. The authors postulated that these cortical organization changes correlate with the motor gains captured by the clinical scales [2].

Ballister and collab. highlight that the measurement of corticospinal connectivity using the NBS procedure could be used as a biomarker for detecting chronic stroke patients who will respond to rehabilitation treatment [2].

In chronic stroke patients, no motor improvements are expected, and the efficacy of rehabilitation treatments in this phase is still debated. Patients are discharged into the community with limited rehabilitation programs or therapist access. This study conducted by Ballester shows that rehabilitation using new technologies, such as Virtual Reality, is feasible at home without specialist supervision and is accepted by most patients. The Rehabilitation Gaming System (RGS) uses a goal-oriented approach in which the patient tries to control the avatar of its paretic and non-paretic upper limbs while executing complex motor tasks (such as catching moving balls on the screen). RGS parameters are automatically adapted to maintain the game challenge. At the end of the training period, patients were able to perform more difficult tasks, reflecting better performance in both paretic and non-paretic limbs.

This study demonstrates that VR training for 3 weeks induces improvements in motor function of the distal paretic upper limb in chronic stroke patients. Functional gains were obtained for finger flexion and extension movements. These data were obtained using the Automated Evaluation of Motor Function, included in the RGS system. Moreover, VR training decreased spasticity in the distal upper limb. The authors highlight the significant improvements observed in paretic hand abilities during daily activities after 3 weeks of training.

What can we learn from the 6th edition of Canadian Best Practice Recommendations?

EFNR as a regional actor