The burden of stroke

Learn more about the recovery of precise hand movements after stroke.

The need for innovations in neurorehabilitation programs

Current guidelines support the concept of repetitive task training (RTT), which refers to a high number of motor task repetitions to enhance sensorimotor function [4]. Since neuroplasticity occurs mainly in the first 5 weeks after stroke, this interval should be used to maximize and adapt recovery programs for the upper limb [5]. However, high-intensity RTT in the early phase after a cerebrovascular accident is challenging in clinical practice. It demands patients remain consistent and motivated while the medical staff should be available and have the required resources [6, 7].

Accordingly, developing and implementing new treatment programs that aim to rehabilitate the upper limb is urgent. The main goals of such programs are

Repetitive sensory stimulation (RSS) is a primarily passive treatment that determines neuroplastic changes in the general healthy population, similar to repetitive task training [8]. RSS has been assessed in studies of chronic stroke patients months or even years after a cerebrovascular accident. Positive upper limb function and sensation results, including tactile discrimination, were obtained [9]. It has been demonstrated that RSS sessions could reduce intra-cortical inhibition induced by GABA (gamma-aminobutyric acid) in the motor cortex or could facilitate connections between the primary sensory and primary motor cortical areas, mediated by glutamate [10–11].

However, there is no data about implementing RSS in the acute/early subacute phase of stroke, even though this seems to be the most critical period for neuroplasticity and overall recovery [12]. Therefore, the study developed by Chatterjee et al. [13] aimed to evaluate the feasibility and sustainability of implementing repetitive sensory stimulation programs in the first 2 weeks following a stroke [13].

The study conducted by Chatterjee et al. [13] was a multicenter, single-blind, randomized controlled trial in which 40 patients were recruited who met the eligibility criteria [13] (Figure 1) were recruited in stroke units between January and November 2017. 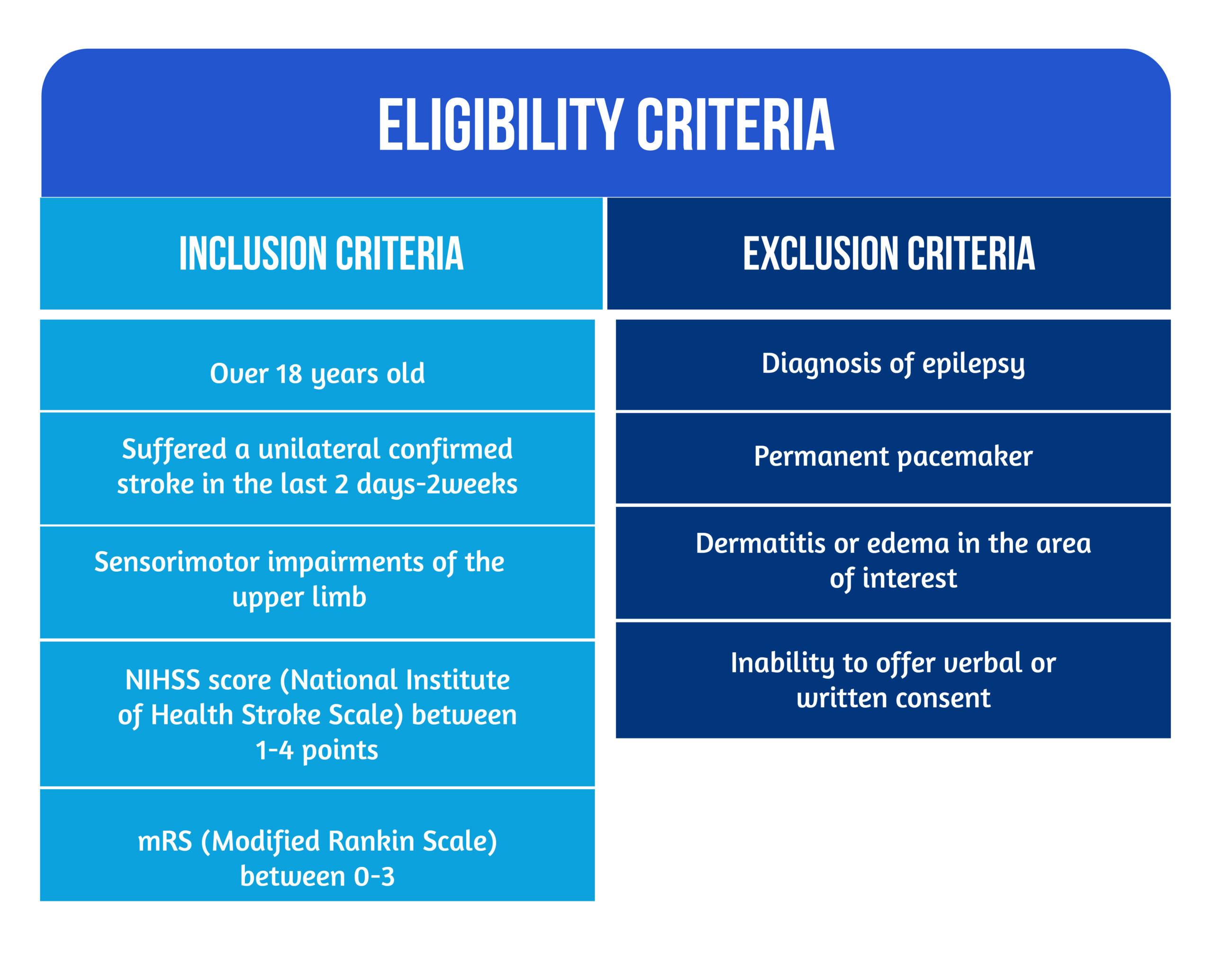 After assessing the inclusion and exclusion criteria, patients were randomized into two groups (experimental- RSS and control- UC groups). An appropriate-sized glove and stimulator box were provided for the repetitive sensory stimulation in the experimental group (23 patients) (Figure 2.). Supra-sensory pulses were used with the help of electrodes placed on the glove’s distal and proximal phalanges. Therefore, stimulation was delivered on the entire area of interest with an intensity of 1 to 20 mA and at a frequency of 20 Hz. The intensity was adapted for each patient and increased to their tolerance level. On the other hand, the UC group (17 patients) received classical neurological rehabilitation with physiotherapists and occupational therapists.

Besides demographic data and the results of the questionnaire developed for the evaluation of patient acceptability of the study, the primary outcome tool was Action Research Arm Test (ARAT). For this test, the scores could indicate

Another parameter of interest was the Fugl-Meyer Assessment of the upper extremity outcome tool (FMA-UE), which is highly recommended as an observational measure for upper limb deficits [16]. For a better evaluation of dexterity, the time needed to complete the “nine-hole peg test“ (NHPT) was also used [13]. These tools were reevaluated 2 weeks after completing the sessions and at 3 months follow-ups.

Of all screened patients, some had mild upper limb deficits so that the intervention would show no benefit; others had pre-existing severe dysfunctions or were unable to give informed consent. The main challenge was to find eligible patients, from whom 77% were recruited.

Finally, 40 patients were included in the 1.5-year study. Rehabilitation treatment included 18 hours per patient in each group. It is possible that the intervention group received physio- and occupational therapy for more extended periods (median time was 21,7 hours in the RSS group versus 18 hours in the UC group). Nevertheless, both groups had the same amount of upper-limb-specific physiotherapy (a median of 3.5 hours). The maximal time per session for sensory stimulation was 45 minutes, and patients underwent 14 sessions. 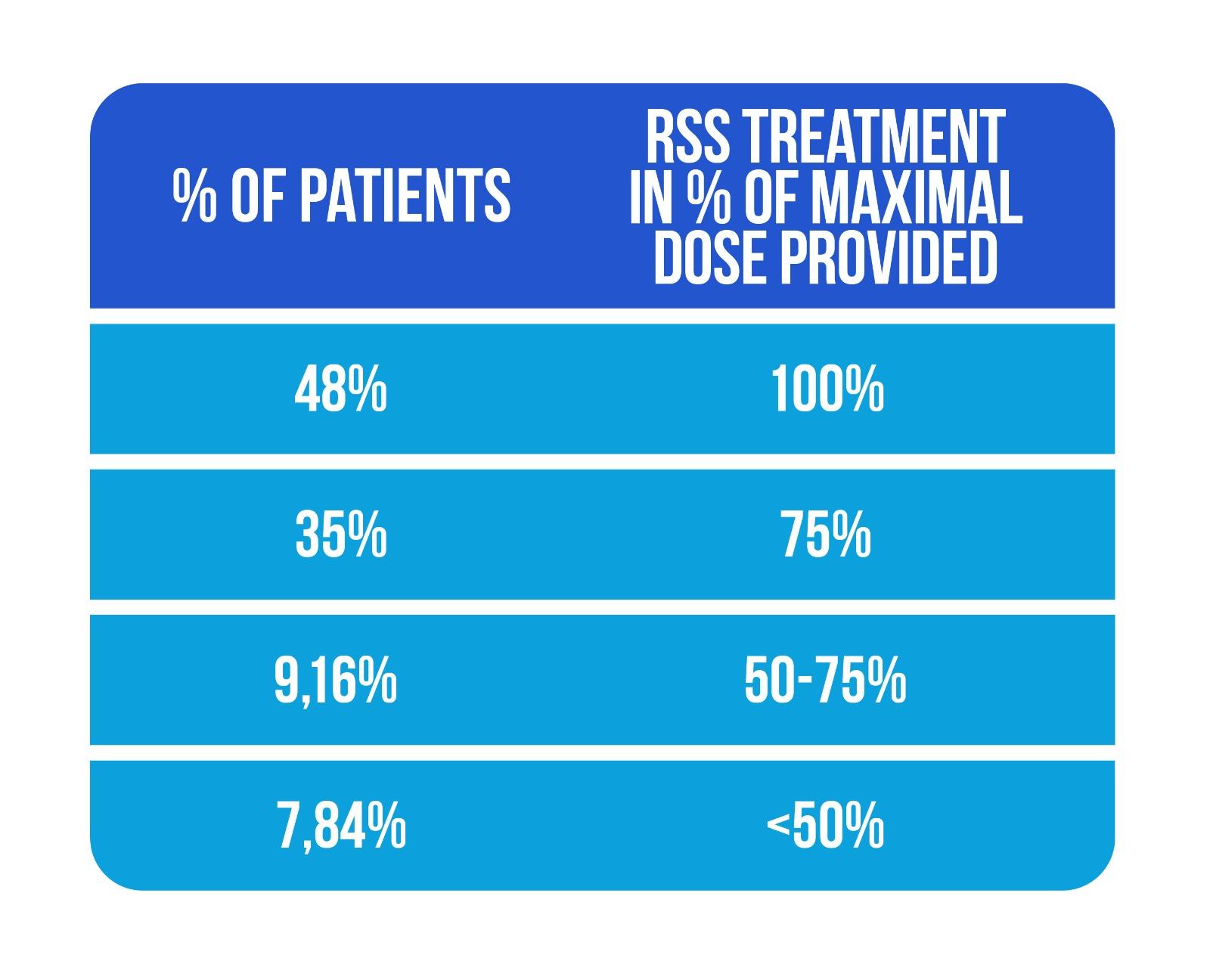 All patients included in both groups returned at 3 months for follow-up analysis, showing good feasibility for this study design.

Adverse events of sensory stimulation were rare and minor, with patients reporting shoulder discomfort, hand pain, and dry skin. There were no dropouts from the study. Furthermore, the acceptability of the glove was assessed via questionnaires filled in by almost 50% of the participants. Most patients reported that the glove was easy to use after training, and some reported additional benefits.

Some variables pertaining to the acceptability of the sensory stimulation gloves are represented in Table 1 below.

In this study conducted by Chatterjee [13], changes in upper limb and hand motor function were measured at the end of the rehabilitation treatment (at 2 weeks) and 3 months follow-up [13]. The scales used demonstrated validity and reliability when applied to stroke rehabilitation [16]. The benefits of the intervention were compared to published values of minimal clinically important differences (MCID) in acute and chronic stroke [14, 15, 17–19].

After rehabilitation, ARAT scores improved in 80% of patients from the RSS group in contrast to 47% from the conventional care group at 2 weeks. At 3 months, 70% of all patients had persistent improvements. The use of the glove for sensory stimulation for 14 sessions makes the patient three times more likely to improve at the end of treatment and 1,5 times more likely to achieve a good motor score at follow-up. Also, patients in the RSS group exceeded the minimal clinically important differences (MCID) in ARAT score, FMA-UE score, and NHPT by more points than patients in the usual care group at 2 weeks and 3 months evaluations, respectively, demonstrating that the use of sensory stimulation is efficient in improving hand motor function when implemented early after stroke [13].

The changes in all outcome tools were significant at 2 weeks but seemed to attenuate at the 3 months evaluation. Thus, this could be an argument for a more extended rehabilitation intervention in the acute phase of stroke.

The authors suggested that the data needs validation in a larger trial of RSS, which will include a more significant number of participants to obtain effectiveness and power to detect positive clinical outcomes of sensory stimulation [13].

Limitations of the study

The study conducted by Chatterjee [13] assessing the feasibility and efficacy of RSS on the affected hand after stroke has some limitations. The duration of intervention was longer in the RSS groups, which could influence the results. Other studies have shown that more intense training sessions will lead to greater improvements in motor scores [20]. The authors pinpointed the necessity of a sham stimulation treatment in the usual care group for future studies [13].

Another limitation was group heterogeneity at inclusion. The RSS group started the intervention 2 days earlier, patients` status before the actual stroke was slightly better on the modified Rankin Scale, but they seemed to have a more severe arm function at baseline. To ensure group equality, the authors [13] suggested the inclusion in future trials of the SAFE score and PREP2 algorithm [21–22].

Why use repetitive sensory stimulation in the rehabilitation of the upper limb?

The researchers designed this single-blinded and randomized study to assess the feasibility and acceptability of a larger study in stroke rehabilitation [13]. The intervention used was repetitive sensory stimulation applied on a glove on the affected hand of stroke patients, administered over usual rehabilitation interventions, and was the first study to include patients in the early phase after stroke. The study design is feasible, but the inclusion of patients from many stroke centers would be necessary for future research to obtain the optimal amount of data needed to prove effectiveness. The patients tolerated the sensory stimulation well, adhering to the intervention. Patient satisfaction after RSS was also noticeable. Nevertheless, more homogenous randomization into groups using more sensitive scales for upper limb function should improve data accuracy [13].

The RSS intervention was beneficial and improved arm function measured by any study scales. Patients who used the glove for sensory stimulation were 3 times more likely to achieve a better motor outcome at 2 weeks and 1,5 times at 3 months, but the differences were not statistically significant. A strong point of this study was that improvements in motor scales were compared with the spontaneous evolution of motor deficits after stroke, called the minimal clinical important difference (MCID). Patients with RSS therapy had scores that exceeded MCID with more points than patients with conventional therapy alone, suggesting the efficacy of the intervention [13].

Further studies on large groups of patients with longer interventions are required to assess the efficacy of repetitive sensory stimulation and its place in the rehabilitation of hand function in stroke patients.

Accelerating the process of rehabilitation through virtual reality: The standing point of [email protected] in post-stroke disability