Can we accelerate the process of rehabilitation through virtual reality?

Cognitive and motor impairment are often associated with acquired brain injury, leading to poor quality of life for patients and their families. Different unconventional rehabilitation methods have recently been developed for several neurological diseases, including stroke [1]. Virtual Reality (VR) involves specific software-generated actions performed by the patient, facilitating the improvement of motor disability and cognition impairment. A vital advantage of VR is the immediate availability of feedback on the generated actions of the patient. Learn more about the recovery of precise hand movements after stroke.

While at the start of the implementation process, VR was used for testing a single-dimensional aspect of post-stroke disability, the paradigm has shifted to a more multimodal integrated procedure. Specific tasks, like the [email protected] (a customizable multi-purpose VR scenario possessing both cognitive and motor test parts), combine the following domains of rehabilitation: attention assessment, memory testing, and upper-limb rehabilitation [1]. 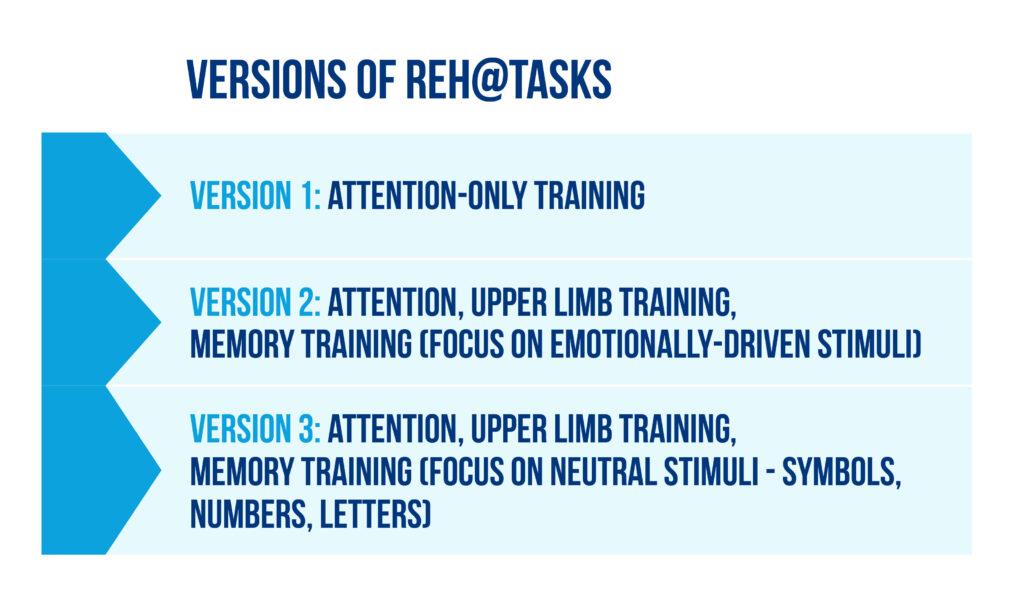 Multiple versions of the [email protected] have been tested in the past (Figure 1). Its first version involved an attention-testing process in discriminating specifically marked symbols within a conglomeration of different elements [2]. The next prototype was further enriched to enable attention, upper limb, and memory training, focusing on emotionally-driven stimuli [3]. The current [email protected] prototype, employed by Faria et al. (2018) in a pilot study from 2018, contains neutral stimuli with the addition of an increase in difficulty as the task is completed [1].

The VR rehabilitation method has been developed after consulting multiple healthcare professionals, with the aid of voluntary participants, to create the level design [1]. 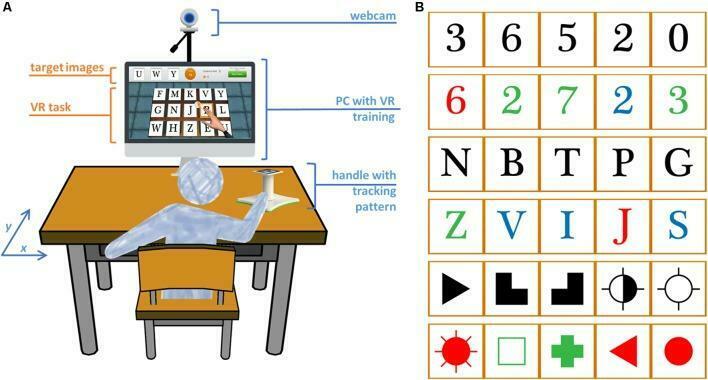 Figure 2. Testing conditions. (A) A tabletop is presented to the patient, recording the arm motricity by pattern-identification trackers. These movements are superimposed with the ones of a virtual arm. (B) Multiple visual stimuli are randomly generated, from colored letters to numbers or symbols. A particular aspect of the whole method is the increased difficulty encountered by the patient as the training evolves [1].From https://pubmed.ncbi.nlm.nih.gov/29899719/

The difficulty is increased incrementally with a variety of different parameters, such as the manipulation of the number of targets and distracting elements, the change or addition of different categories of stimuli, the time available for the patients to solve the levels, the time available for the selection of the symbols/numbers/letters, the amount of time for memorizing the target (in-memory variants) [1].

A higher difficulty level is characterized by the appearance of an increased number of visual elements, a reduction in the available time for both memorizing and finishing the task, and the action selection is quicker.

For the duration of the rehabilitation method, the patient has the opportunity to increase the time for solving the task when failing to finish within the allocated time. This bonus is available for three consecutive times. If the subject spends extra time without completing the level where it encountered difficulties, the program will send the patient to the previous level. If the completion is succeeded with the aid of extra time, the software will restart the level, asking the patient to resolve the task without the bonus time [1].

Faria and collaborators pinpointed that [email protected] may be an alternative to standard occupational rehabilitation and improve motor and cognitive outcomes compared to patients in standard rehabilitation conditions [1].

Their study enrolled 24 patients with chronic brain ischemia (>6 months) after applying the inclusion and exclusion criteria presented in Figure 3 below: 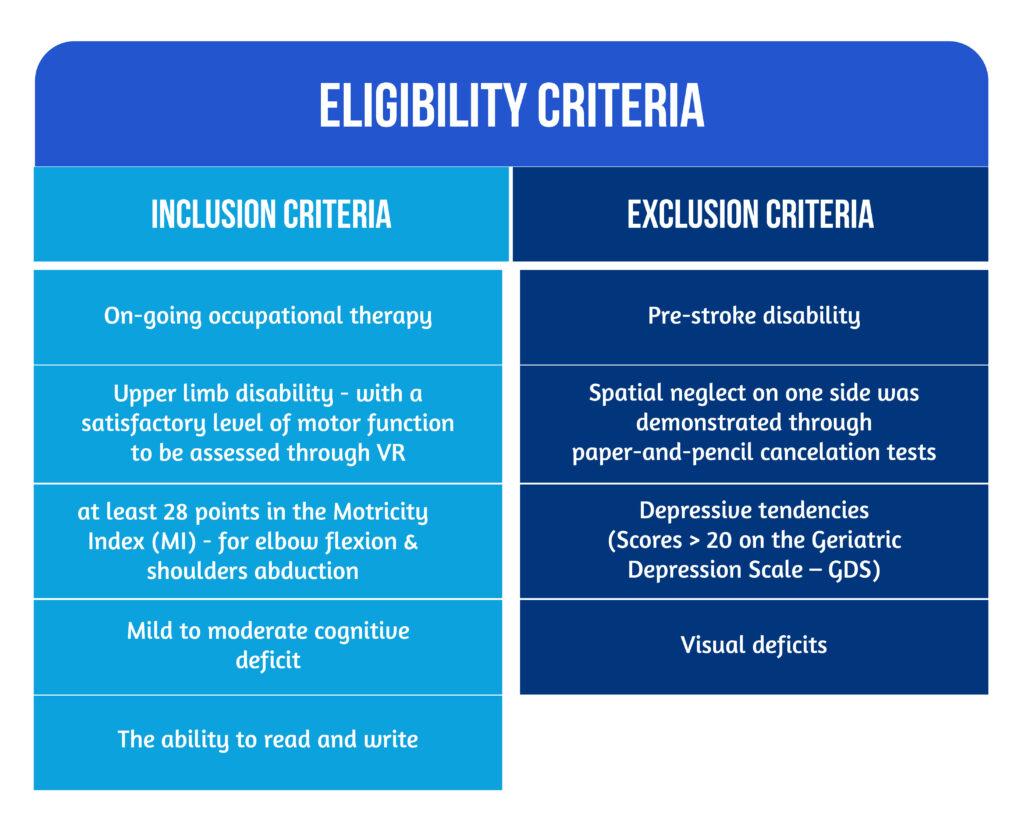 To ensure a clear understating and familiarization with software interface instructions of the VR tasks, before the first session, subjects in the experimental group underwent an average of three short training trials with the [email protected]. Each participant in the VR group followed 12 sessions of 45 min with the [email protected], three times a week for 1 month. The intervention in the control group was time-matched, including twelve sessions of 45 min of standard occupational therapy, with temporospatial orientation activities and writing training. Moreover, subjects in both groups participated in 2 to 3 weekly sessions of 45–60 minutes of conventional occupational therapy focusing on motor training (fine motor skills, dexterity training) of the upper limb, balance training, and cognitive and communication training.

Several standardized clinical scales were used to evaluate motor and cognitive functions at baseline, end of treatment, and 1-month follow-up in both groups, as highlighted in Figure 4 below [1]. 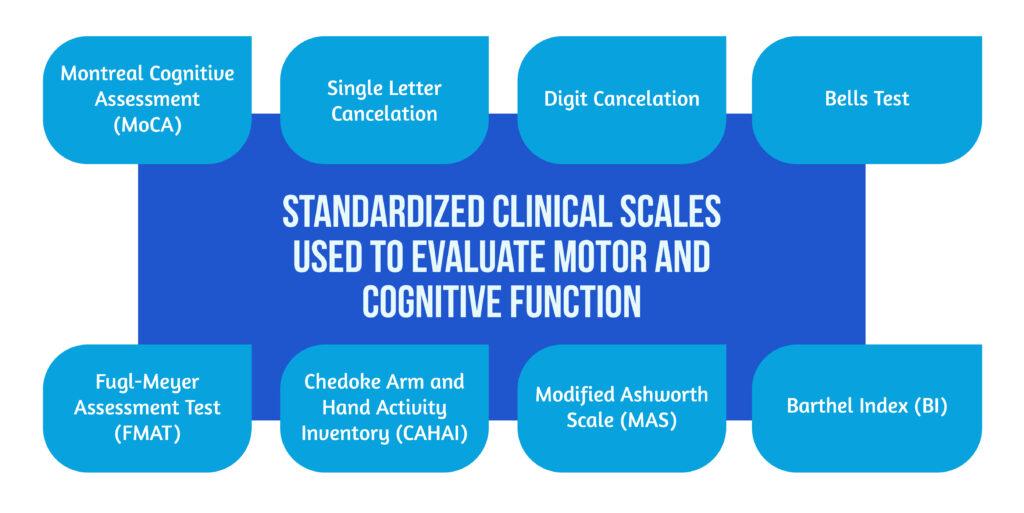 Figure 4. Standardized Scales for the Evaluation of Motor and Cognitive Function

Those scales were previously associated with the [email protected]  to measure the impairment severity pre-and post-intervention [2–5].

At baseline, end of treatment, and follow-up, the analysis of the cognitive scores displayed a significant impact on MoCA total score in both groups. However, the VR group showed a significant impact on MoCA-Total, and one of its subdomains (MoCA-Orientation) compared to the control population, whose scores represent different MoCA aspects (MoCA-Total, MoCA-Language, and MoCA-Recall). The improvement rate was significant in both interventional groups at the end of the assessment [1].

Considering the three evaluation moments, the CAHAI, Barthel Index, and MAS scores for motor assessment were balanced at baseline between the two groups. For FMAT, higher scores were registered in the control group [1].

Several variables were taken into account for assessing the evolution of patients in the VR group: the difficulty level achieved during each training session, the type of task (attention/memory), and the type of stimulus. For both tasks proposed during VR training with [email protected], improvement rates were recorded in both the attention and memory dimensions. Following the increase in task difficulty, a decrease in positive results was observed as a general rule. Outcomes registered in the memory tasks expressed a slowly ascending improvement rate in comparison to the attentional tests, where results were more rapidly acquired.

Patients displayed distinct performances when it came to the type of stimulus (numbers, colored numbers, letters, colored letters, symbols, colored symbols). The difficulty was consistent with the level of abstraction of each category [1, 2, 4].

When considering the outcomes in the motor performance measures, the analysis of movement trajectories offered information on both ranges of movement and the smoothness of movements. The interventional study compared movement smoothness between the first and the last training sessions and revealed a significant decrease in movement segments, indicating longer and smoother trajectories [1, 5, 6].

Conclusions on the process of rehabilitation through virtual reality

The work of Faria et al. [1] compared to the motor and cognitive training with [email protected] in addition to conventional occupational therapy to standard occupational rehabilitation alone to discover the benefits of an integrative VR approach for stroke recovery, which combines cognitive and motor training [1].

The authors emphasized several limitations encountered during [email protected] research, namely mild cognitive and motor improvement and a reduction in the impact of the intervention for those participants where the cognition deficit developed after the motor impairment [1].

Is there any geographic variation in stroke burden worldwide?