This article will tackle the possibility of predicting the recovery of precise hand movements after a stroke by addressing a study of dynamic precision grip force control post-stroke.

Stroke is a leading cause of disability worldwide. In stroke survivors, upper extremity impairment occurs in 50-80% of patients in the acute phase and persists in the sub-acute phase in 40-50% of patients [1]. Keep in mind that recovery of motor function continues for more than one year after a stroke. Loss of upper limb (UL), especially of hand function, is correlated with disability and is a strong negative predictor of quality of life for the patients [2]. Essential tasks of daily living activities require a preserved hand function. Basic physical needs and the abilities required for their performance are described in Figure 1 below: 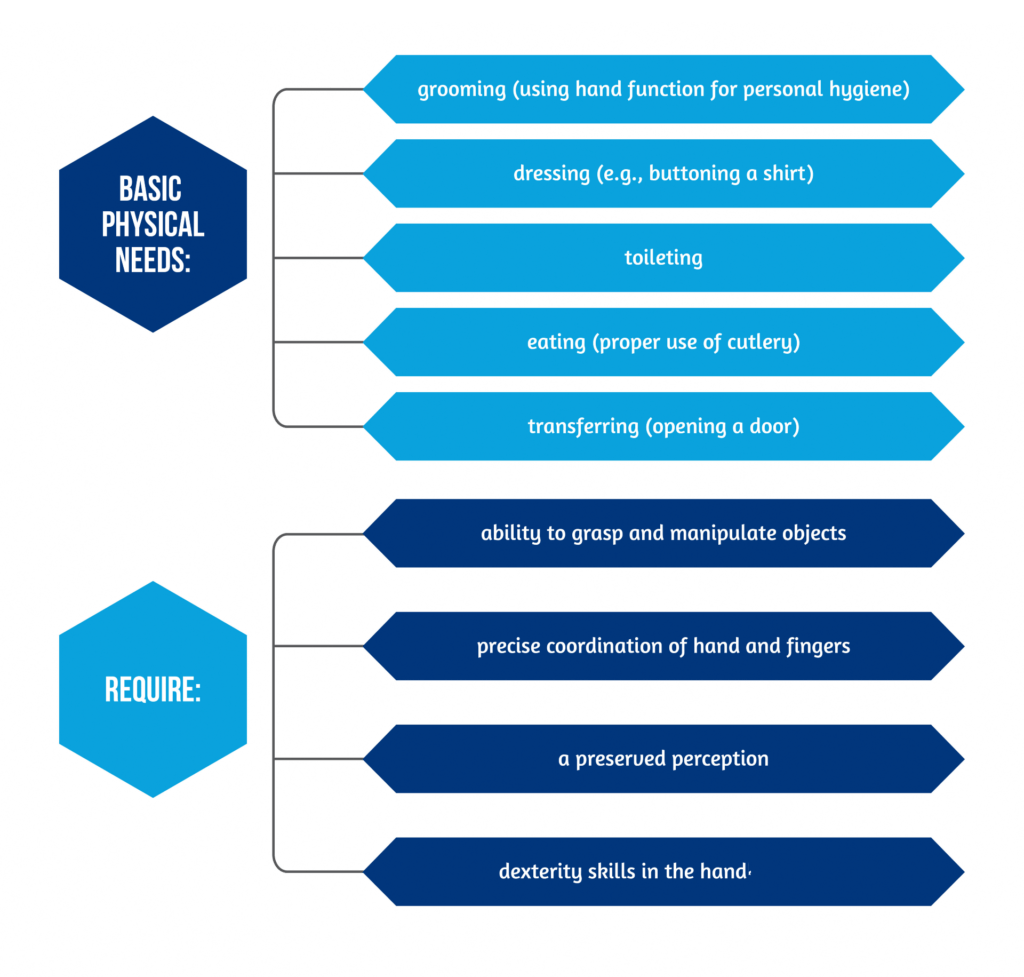 The importance of assessing hand function in stroke

Considering the existing literature, only a handful of studies tried to evaluate the extent and implications of hand deficit after stroke, leaving a degree of uncertainty over this domain of neurorehabilitation.

This summary highlights the results of a clinical study from 2022 by Pennati et al. that assessed precise hand functions (grip force control) in a group of 80 post-stroke patients. The study described the recovery of precision in hand movements and determined clinical and imagistic predictive factors in grip force performance at six months [3].

The hand has a complex structure with a broad cortical representation in the motor area. Sophisticated neural circuits control hand function, underlying its indispensable role in patients’ functional independence. Cortico-spinal tract (CST) lesions are common in stroke and are correlated with impairments in fine control of hand movements [4]. The CST has an essential role in precise motor control, such as grip force and individual finger movements. If the integrity of CST is partially preserved after stroke, as demonstrated by the values of motor evoked potentials, studies showed motor improvements in hand function [5]. Other neural substrates and pathways involved in the hand rehabilitation process, as showcased in Figure 2, are:

Figure 2. Other neural substrates and pathways involved in hand rehabilitation 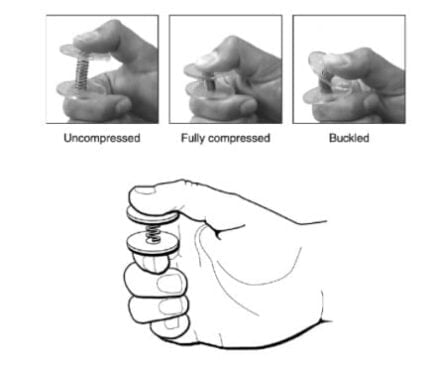 Figure 3. Example of a type of spring used for the training of Grip Force Control [9]
In stroke patients, sensorimotor upper limb deficits are correlated with a major disability, and the distal part of the hand is usually more severely affected. Manipulation of objects, grip precision, and coordinated finger movements are severely impaired. Despite the relevant clinical recovery of the upper limb and hand motor and sensory deficits over time, there is still decreased performance in precise hand movements, such as precision grip force control.

After a stroke, the perspective of regaining hand function is essential for patients: the degree and the timing of recovery are equally important. Many assessment tools for arm/hand impairment and function (activity limitations) have been developed and are recommended for clinical assessment, monitoring, or decision-making [10]. The primary upper limb and hand functions can be assessed by a series of motor and sensory tests, as described in Table 1:

Precise hand movements need special assessments and specific tests. The handgrip is one of the functions essential for manipulating objects during daily life activities and is defined by the ability to grasp an object between the tactile pads of the thumb and the fingertips. Grip deficits should be tested during grasping stable and moving objects. In the affected hand, impaired force dosing and discoordination are detected in a stable grasp, and impaired ability to generate scaled and targeted force of the fingers is found in a dynamic grasp.

The tools for assessing precise hand functions are

One of the outcomes of the study was that patients with limited lesions of the cortico-spinal tract would recover spontaneously in the first 3 to 6 months after stroke, as demonstrated by an improvement in FMA-UE scores. In contrast, if the damage to the CST is important, there is little or no improvement in hand function.

The selection of stroke patients for hand function assessment

The study of Pennati et al. [3] is a longitudinal case-control study, which included 80 post-stroke patients admitted as inpatients in a department of Rehabilitation Medicine, and 23 healthy adult individuals of comparable age, without a history of neurological disease as a control group. The eligibility criteria are described in Figure 4 below: 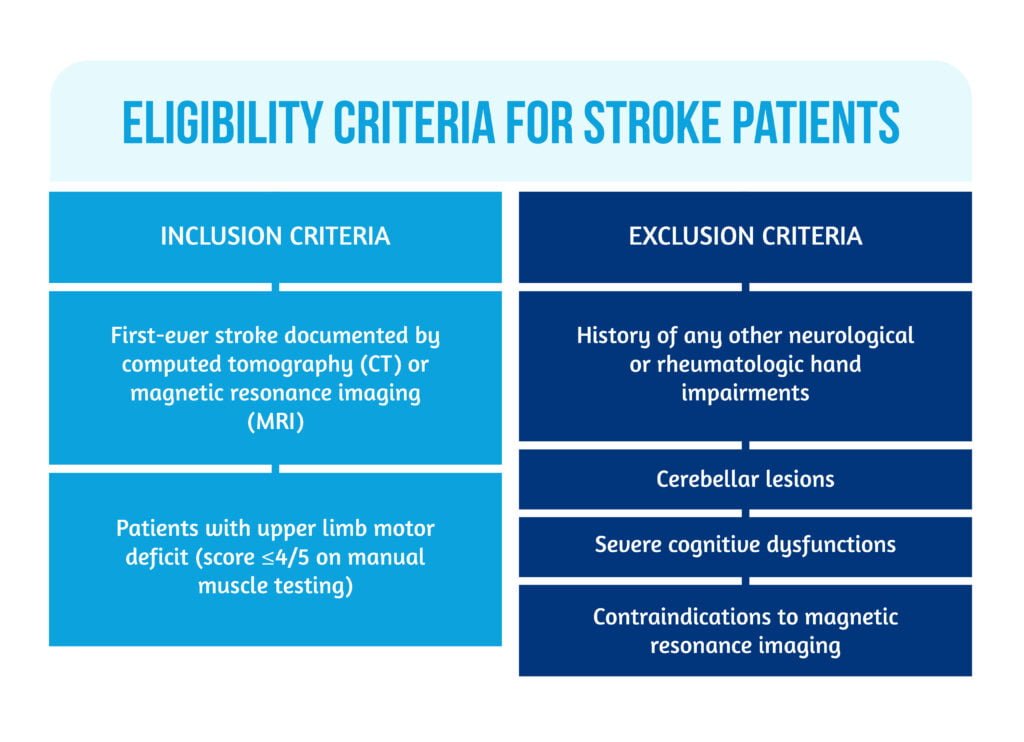 In the design of the study, Pennati et al. [3] included clinical assessments at 3-time intervals: T1 (between 2 to 6 weeks after stroke), T2 (at 3 months), and T3 (at 6 months), using the tests mentioned above for basic hand and precise hand functions.

Imagistic parameters assessments were done by magnetic resonance imaging (with a 3,0T MR system) at T1 and consisted of:

Results of the study

The results showed that the patients had moderate to severe upper limb motor deficits, as indicated by the Fugl-Meyer assessment of the Upper Extremity scores.

Precise hand movements were significantly impaired in the affected hand of patients but also in the less-affected hand (on the upper limb on the healthy side) compared to healthy control subjects. In almost half of the patients (41.3%), no meaningful correlations were identified between the hand dominance and the precision parameters analyzed; when performing the Strength-Dexterity test, dynamic compression forces were smaller, and the handgrip more unstable in the patient’s affected hand (Figure 5). 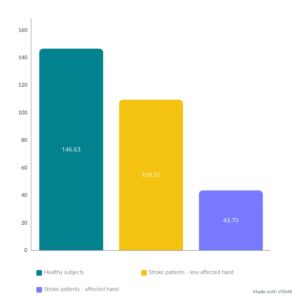 The values obtained in the CorrForce test, Dexterity score, and Repeatability score were statistically significantly lower in the affected hand than in the non-affected one and the control group. For these scores, values obtained in the non-affected side of patients were similar to those of healthy controls. The study shows that there is a spontaneous recovery in precise hand function in the first 3 to 6 months after a stroke.

Precision grip force control improved over time in stroke patients, as demonstrated by significant increases in Dexterity-score between each time interval (from initial T1 evaluation versus T2 at 3 months, and from T2 evaluation versus T3 at 6 months), with 62% of patients improving over time. Also, a progressive increase in CorrForce between T1 and T3 was demonstrated, with improvements in the score obtained in 52% of the patients. The repeatability score did not change over time in the affected hand.

Precision grip recovery did not occur in the paretic hand of 24% of patients who could not perform the Strength-Dexterity test at 6 months. Despite improvements, CorrForce and Dexterity-score values remained significantly lower than normal in affected hands 39% and, respectively, 67% of stroke patients.

Significant correlations were detected between clinical scales (FMA-UE and FMA-hand) that measured motor and sensory impairments and the scales assessing precision grip force control in the affected hand (CorrForce and Dexterity-score). However, even in patients with maximal improvements in FMA-Hand scores, there are still impairments in fine grip force control and dexterous finger movements (with 12% of patients presenting signs of impairment in CorrForce and 33% in the Dexterity score).

Conclusions on recovery of precise hand movements after stroke

The findings of the 2022 Pennati et al. [3] study reflect the essential role of CST in precise movement control of hand and fingers, especially in controlling grip performance and precise finger movements. Moreover, pyramidal tract integrity has a key role in functional hand rehabilitation.

There is the possibility of slower recovery of fine grip force control and precise finger coordinated movements than the sensorimotor hand function that lasts beyond 3 months after stroke. Furthermore, the contralateral non-affected hand showed decreased ability to control precise grip functions, which could be explained by considering the following hypotheses: the affliction of the ipsilateral projections of the cortico-spinal tract, the impact of the non-dominant hemisphere, or the disablement of the frontoparietal-cerebellar circuits.

The lessons of the study are presented in Table 3 below:

What can we learn from the 6th edition of Canadian Best Practice Recommendations?

The positive effect of cognitive rehabilitation in early ischemic stroke

No comments to show.
Manage Cookie Consent
To provide the best experiences, we use technologies like cookies to store and/or access device information. Consenting to these technologies will allow us to process data such as browsing behavior or unique IDs on this site. Not consenting or withdrawing consent, may adversely affect certain features and functions.
Manage options Manage services Manage vendors Read more about these purposes
View preferences
{title} {title} {title}