Is motor function after stroke is promoted by early neural network reorganization? Stroke is a common cerebrovascular disease with high morbidity and mortality worldwide, representing the leading global contributor to adult disability. However, after severe neurological impairments, most patients show some degree of sensory and motor function restoration. It has been suggested that brain plasticity or the structural and functional modifications of neuronal constituents and networks is responsible for this spontaneous functional recovery [1].

Or watch some interviews with top-notch experts:

Remodeling neuronal structures and networks at various levels, from single cells to large-scale networks, facilitates recovery from motor cortex lesions after stroke. Within hours following ischemia, there have been noticed changes in growth factors (critical molecules for tissue repair and regeneration), transmitter systems (e.g., glutamate and gamma-aminobutyric acid transmitter systems), and axonal sprouting (early growth of axon with an important role in neuroplasticity, neuronal development, and recovery of injured neurons). Neuroimaging studies at the system level showed that the connectivity of the primary motor cortex (M1) with remote areas is decreased in the first few weeks post-stroke but then rises along with motor recovery [2]. Neuronal reorganization after a stroke is observed in functional imaging studies, which provide information about changes in the stimulus or task-induced activation patterns in the affected (ipsilesional) and opposite (contralesional) hemispheres of the brain [1]. The finding that modifications in network connectivity are associated with neurological dysfunction has inspired the concept of “correcting” the dysfunctional network architecture utilizing noninvasive brain stimulation techniques, such as repetitive transcranial magnetic stimulation (rTMS) [2].

According to a proposal made by the Stroke Roundtable Consortium [3], the time after a stroke was divided into phases:

Figure 1. The Phases of Stroke

This distinction is made because post-stroke mechanisms associated with recovery are time-dependent. The most dramatic improvements happen in the first few weeks following a stroke, frequently hitting a relative plateau after three months marked by less-significant recovery rates, especially concerning motor symptoms [3]. A cascade of plasticity-enhancing processes causes the effects presented in Figure 2 [3]. 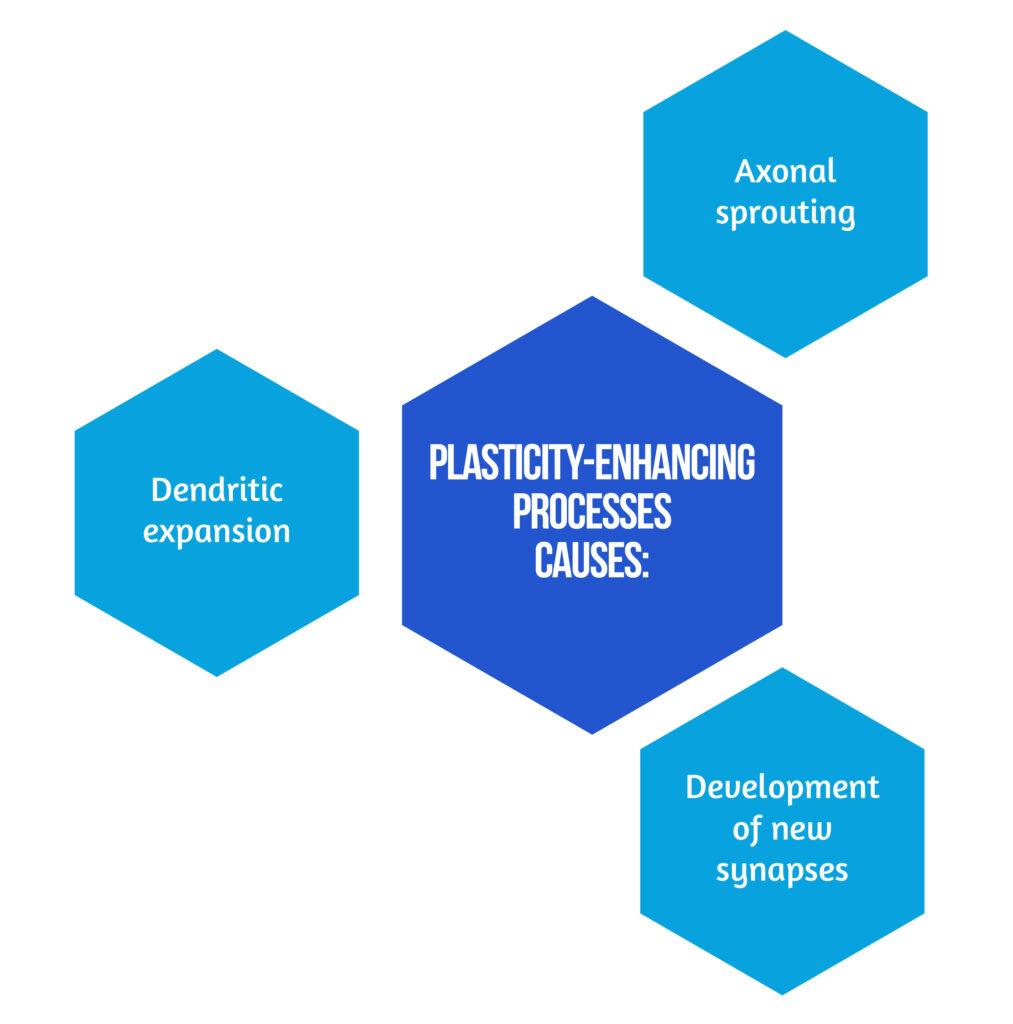 Neurological abnormalities following a focal stroke lesion are influenced by the widespread failure of interconnected brain systems and the local dysfunction at the injury site. It is possible to reconcile earlier localized neuroimaging findings with known anatomical connections of sensory function to a considerable extent because of the evidence for functional and effective connectivity behind clinical symptoms [4].

In animal models, rTMS can stimulate synaptic plasticity through different processes, as showcased in Figure 3. 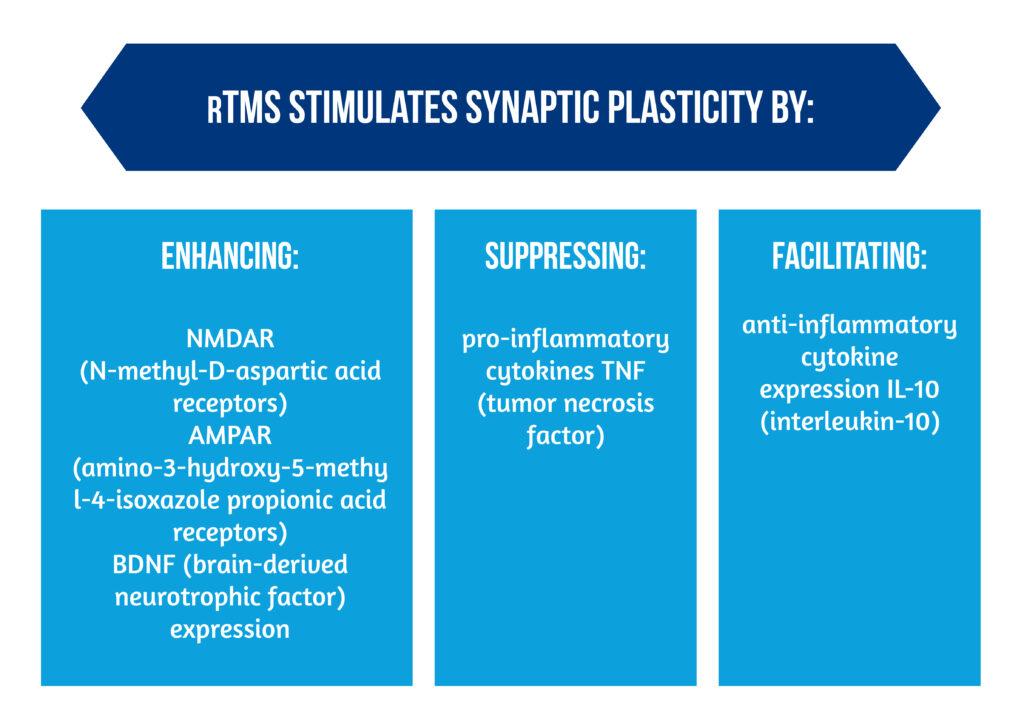 Figure 3. The Effects of rTMS on Synaptic Plasticity

Recently, rTMS has become popular as a novel form of neurological rehabilitation therapy, and prior studies have shown that it is effective in reducing motor impairment following stroke [7].

The aim of the study “Shaping Early Reorganization of Neural Networks Promotes Motor Function after Stroke”, conducted by L. J. Volz et al., was to demonstrate that motor recovery of the paretic hand can be enhanced by repeated applications of iTBS (intermittent theta-burst stimulation) over ipsilesional M1, therefore ameliorating stroke-induced neuronal network dysconnectivity [2]. They used maximum grip strength as their main outcome parameter to assess motor recovery. The grip force is a key component of regaining hand motor function; it can be measured quickly and easily while maintaining high standards and is resistant to compensatory movement techniques because the primary movement direction cannot be significantly changed by enlisting other muscles [2].

Pseudo-randomization made sure that both groups were balanced for the following factors known to influence motor recovery and outcome:

Four patients received M1 stimulation, and six received control stimulation after the initial 10 patients enrolled in the trial were randomly allocated to a treatment group. Accordingly, all subsequent patients were assigned to the alternative treatment group after being matched to the patient who met most of the randomization criteria (1-3). In order to eliminate any selection bias, patient matching was carried out by an experimenter who was not involved in the patient’s behavioral, electrophysiological, or neuroimaging assessments. Those were used one day before the initial stimulation (baseline) and one day after the last stimulation to measure hand motor performance, cortical excitability, and resting-state fMRI (post-intervention) [2]. The eligibility criteria are showcased in Figure 4.

The primary outcome parameter was the maximum grip strength knowing that grip performance is a key component of regaining hand motor function, it can be measured quickly and easily, and it is resistant to compensatory movement techniques. Because of this, improvements in grip strength represent a sensitive behavioral marker reflecting the restoration of neurological function rather than compensatory learning of new movement patterns, and it has been directly related to M1 activity [2].

The grip strength and cortical excitability were evaluated by relative grip strength and the Jebsen-Taylor Hand Function Test (JTT) because both involve device-dependent quantification [2]. Jebsen-Taylor Hand Function Test (JTT) uses simulated activities of daily living to provide a standard and objective assessment of fine and gross motor hand function (ADL). It has been demonstrated that determining grip strength using a flexible ball vigorimeter as opposed to a static dynamometer is less reliant on hand anthropometry [2].

The coil was tilted at a 45° angle and touched the skull not with its center but with the rim at the opposite side of the handle in order to minimize any potential effects of cortical stimulation in the control condition. The electromagnetic field is significantly weaker and outside the goal range in this position, but the typical TMS skin sensation is preserved because the coil-cortex distance is virtually greater. A recent study that used this method found no distinction between actual and sham stimulation in terms of how it was perceived. Because it was used as a between-subject design of TMS-naïve patients, it was not known the difference between M1 and control-stimulation groups [2].

Compared to control stimulation during subacute stroke, priming physiotherapy with iTBS given to ipsilesional M1 dramatically improved the recovery of grip strength [2].

Functional Magnetic Resonance Imaging was used to evaluate resting-state blood oxygenation level-dependent activity, which consists of a monitorization by an infrared camera attached to the end of the scanner. The instructions for the patients were to remain motionless and to fixate on a red cross on a black screen. For a functional localizer, task patient performed a motor task that required blocks of unimanual actions that were visually cued rhythmic fist closures. In the next block of trials, written instructions for 2 s indicated whether the left or right hand was to be moved. Fist closures were required from subjects for 15 seconds at a blinking circle’s frequency, followed by 15 seconds of resting [2].

Recently research has demonstrated that the contralesional postcentral gyrus is a primary somatosensory cortex center that receives information from the spinal cord and medullary motor neurons [7]. The research of Chen et al. examined functional connectivity (FC) recovery in stroke patients with a completely or partially paralyzed hand, showcasing the following:

These findings imply that the alterations in FC between intra- and inter-hemispheric motor networks were responsible for the positive effects of paired inhibitory-facilitatory rTMS on motor dysfunction. Furthermore, for early-stage cerebral stroke patients receiving coupled rTMS, FC alterations were substantially linked with the restoration of motor function [7].

The study of Volz et al. highlights that rTMS affects not only the neuronal characteristics of the stimulated region but also the activity levels of distant yet related brain regions. Similarly, it has been shown that a single application of iTBS to M1 in healthy patients enhances the site’s resting-state connection with distant motor regions (ipsi- and contralateral premotor cortex) [2].

At the network level in patients who suffered a first-ever stroke, M1 stimulation appears to have stopped the decline in motor system connectivity measured at rest that was seen in individuals who received control stimulation. Inferring that stimulation-induced increases in connectivity may reflect a brain mechanism supporting the recovery of grip strength in subacute stroke, less reduction in functional connectivity was linked with better outcomes. It was found that iTBS enhance neuroplasticity and motor network connectivity, therefore ameliorating diaschisis and promoting early recovery of motor function [2].

Accelerating the process of rehabilitation through virtual reality: The standing point of [email protected] in post-stroke disability

The effectiveness of intense neurorehabilitation of the upper limb after stroke